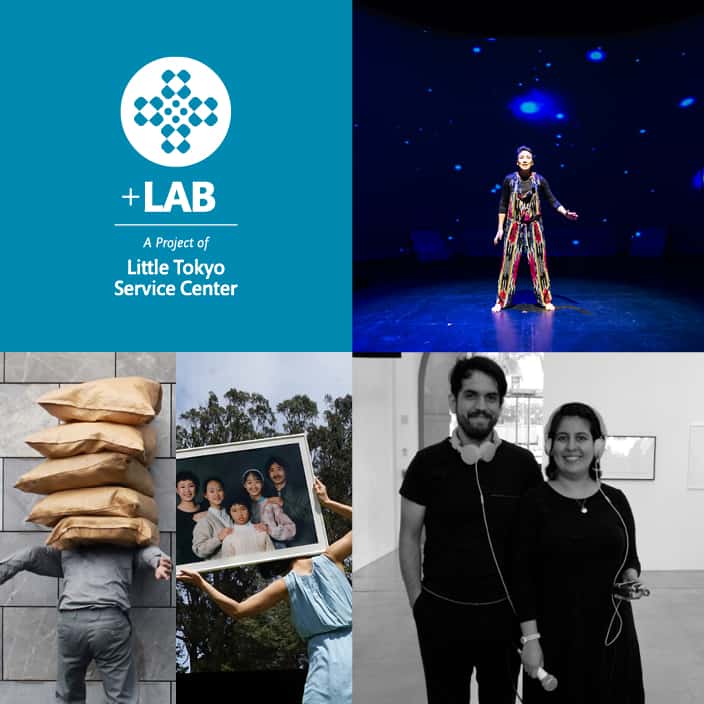 This year’s program theme, Ending Cycles of Displacement, will explore how creative strategies and artistic interventions can help combat the negative impacts of development, which threaten the future sustainability of the Little Tokyo community. The selected California artists will work in collaboration with community stakeholders as part of a three-month immersive residency to create projects related to the program theme.

The Fellows were chosen from a talented pool of candidates, based on the strength of their artistic portfolios and their demonstrated desire to work collaboratively to address challenges facing communities of color. The Fellows will be encouraged to initiate projects that the Little Tokyo community can carry forward after the conclusion of the residency.

Throughout the program, the Fellows will live in the historic Daimaru building on First Street in Little Tokyo. Daimaru, a former hotel with deep roots in the Little Tokyo community, is now owned and operated as an apartment building by LTSC.

Each artist or team will be paired with one of the following program partners: Japanese American Cultural & Community Center (JACCC), Sustainable Little Tokyo (SLT), Visual Communications (VC) and the Japanese American National Museum (JANM). The partner organizations will co-host the Fellows as well as provide them with staff support, studio and workspace.

In addition to local artists and experts from the Little Tokyo community, the Fellows will receive input from various community members and stakeholders—particularly those who are traditionally left out of planning processes, such as lower-income residents, small business owners and those experiencing homelessness.

“The 2018 cohort of artists exceeded our expectations with the creative energy, camaraderie and enthusiasm they brought to Little Tokyo,” said LTSC Director of Planning Grant Sunoo. “We are excited to see our next group of artists build on the impact of the Artist in Residency program.”

“JACCC is excited to welcome our artists-in-residence onto our campus, and see how these artists will expand our work as a hub of Japanese and Japanese American arts, culture, and community,” said JACCC’s Master Artist in Residence Hirokazu Kosaka.

“The Japanese American National Museum is proud to once again be collaborating with the Little Tokyo Service Center and the other co-host venues for the Artist Residency Program,” said Ann Burroughs, president and CEO of JANM. “The artist we hosted last year, Dan Kwong, engaged our community to document stories from this historic district. Those stories were then shared with the public in a moving and thought-provoking performance at JANM’s Tateuchi Democracy Forum. We look forward to hosting another artist this year, who we know will continue this meaningful engagement with the second oldest neighborhood in Los Angeles and contribute greatly to the cultural vitality of Little Tokyo.”

The +LAB Artist Residency Program is funded by a Community Development Investments (CDI) grant from ArtPlace America. LTSC was one of six organizations selected for the program, which explores how community-based organizations—not previously focused on arts and culture—can make the arts a sustainable part of their work.

Isak Immanuel and Marina Fukushima have worked together on several uniquely composed intergenerational dance performances. Focused on local/global questions of place, family, community, and instability, projects have been researched and presented in the SF Bay Area and internationally, including at Headlands Center for the Arts, NOHspace, CounterPulse, Kinosaki International Art Center, and TPAM (Tokyo/Yokohama Performing Arts Meeting). In 2018, they collaborated with locals to develop “THINGS EVAPORATE – dances of sickness and health” as artist-in-residents in Beppu, Japan. Marina Fukushima was born in Tokyo and immigrated to the US in 1992. Specializing in Dance, she received a BFA from Butler University (2001) and an MFA from the University of Iowa (2005). Isak Immanuel grew up in Taos, New Mexico and East Los Angeles. He founded opens in a new windowTableau Stations, an intercultural arts platform, in 2004. He received a BFA in Interdisciplinary Practices from California College of the Arts (1999).

Misael Diaz and Amy Sanchez Arteaga (a.k.a. the Cog•nate Collective)

Since 2010, opens in a new windowCog•nate Collective has worked across disciplines and mediums to engage transnational communities in dialogue on subjects relating to migration, economic displacement, and border enforcement.

Their most recent projects reimagine modalities for understanding and enacting citizenship: analyzing ways that individuals and communities (re)claim their agency – in quotidian spaces, through everyday actions – in defiance of political (de)limitations.

Cog•nate has shown and presented at various venues nationally and internationally including the Ben Maltz Gallery, the Craft and Folk Art Museum, CSUF Grand Central Art Center, the Museum of Contemporary Art San Diego, School of the Art Institute Chicago, Arte Actual FLACSO in Quito, and the Organ Kritischer Kunst in Berlin.

Little Tokyo Service Center is a social service and community development organization that has been creating positive change for the people and places in Southern California for nearly 40 years. We preserve and strengthen the unique ethnic communities of our region and help people thrive. Starting with our own home in Little Tokyo, we build and strengthen communities throughout Southern California where people, culture and our collective future matter.

Established in 1884, Little Tokyo is LA’s second oldest neighborhood and the largest of four remaining Japantowns in the United States. The neighborhood continues to serve as a cultural center for Japanese Americans across Southern California and the nation. In its 133-year history, Little Tokyo has withstood numerous acts of displacement including the forced removal and incarceration of people of Japanese descent during World War II and the demolition of whole tracts of housing, businesses, churches and temples that occurred during the city’s urban renewal and Civic Center expansion of the 1950s through the 1970s. Today, what remains of Little Tokyo is roughly nine square blocks. The latest threat to the cultural and historic identity of Little Tokyo comes in the form of the market-rate housing boom in Downtown LA, which is making the neighborhood less accessible to small businesses and individuals and families of all incomes.