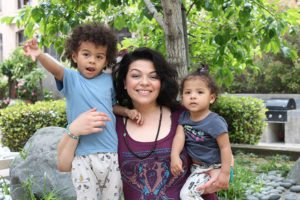 Casa Heiwa resident Daisy first sought assistance from LTSC in 2006, when alcohol and abuse made it unsafe for her to continue living with her parents. Daisy was performing as a musician at the time, but not earning enough for suitable housing.

Unfortunately, the future held more challenges for Daisy, who struggled through a divorce and the pain of two lost pregnancies. She relied on LTSC’s Resident Services staff for counseling and support through those difficult times. “I never felt alone,” she said.

“Someone from LTSC was always there to check in with me.” Daisy has lived at LTSC’s Casa Heiwa since 2014. The stability of her housing has allowed her to balance care for her two children with her career as a musician. She recently completed a new album.