07 Feb Day of Remembrance falls during Black History Month. With momentum for reparations for Black Americans swelling, we can’t ignore the parallels.

Posted at 11:59h in News You Can Use by LTSC Administrator 0 Comments
0 Likes
Share

Day of Remembrance falls during Black History Month. With momentum for reparations for Black Americans swelling, we can’t ignore the parallels.

Though no monetary amount will ever be enough to compensate for the trauma caused by E.O. 9066, the passing of the Civil Liberties Act of 1988 (46 years after E.O. 9066) was a small step in the right direction. President Ronald Regan offered a formal apology and signed the bill which granted survivors reparations checks of $20,000.

The push to seek reparatory justice became known as the Redress and Reparations Movement. Sansei (third generation) Japanese American activists mobilized their community and demanded accountability from the government. Several of LTSC’s current and former staff and board members were personally involved with the movement in its early years, and LTSC often provided translation services and meeting spaces for the cause. The tactics for the Redress and Reparations movement were rooted in lessons from the Civil Rights Movement, and the support and solidarity from the Black community and other communities of color helped make the push for reparations possible.

“​​We were very fortunate to have the early backing of Congressman Mervyn Dymally who sponsored the National Coalition for Redress/Reparations bill in 1983 and mobilized support of the Congressional Black Caucus. Congressman Ron Dellums gave an impassioned testimony during the hearings in Congress about seeing his Japanese American friend being taken away and crying out, ‘don’t take my friend!’” explained Kathy Masaoka, LTSC board member and co-chair of Nikkei for Civil Rights and Redress.

Especially during Black History Month, LTSC recognizes the impact the Black community had on Japanese American reparations and the tools they shared with our community in our fight for justice. Our freedoms today owe much to the civil rights work of the Black community, and as other communities of color in the United States, our histories and futures are intertwined.

“Many of us Sansei fought alongside other communities…because we saw ourselves as part of the Third World,” said Masaoka. “As people of color, we all had been denied our history and felt the same self-hate due to racism.  We called each other ‘brothers and sisters’ and that sense of solidarity influenced the redress movement.”

While Japanese Americans achieved some measure of redress and reparations in 1988, Black Americans are still fighting for reparations for centuries of slavery and injustice against their community.

“Fighting for and winning redress taught us the importance of standing up for others, not just because our experiences might be similar, but because they come from a system that is rooted in white supremacy. We support reparations for the Black community because it is owed, long overdue and part of our own healing,” stated Masaoka. 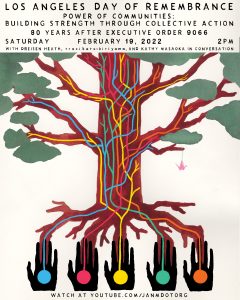 Learn more about the shared history between the Black and Japanese American communities at the virtual Los Angeles Day of Remembrance event on Feb. 19 at 2:00 PM (PST), which will feature a conversation about reparations for the Black Community between reparations expert Dreisen Heath and Japanese activists Kathy Masaoka and traci kato-kiriyama. The Los Angeles Day of Remembrance is an annual event co-sponsored by LTSC and other Japanese American organizations in Southern California, which seeks to educate about the history of E.O. 9066 and the importance of protecting civil rights.  This year’s event will highlight why it is especially important for our community and other communities of color to support H.R. 40, a bill introduced in 2021 which would establish a commission to study and develop proposals for Black American reparations.

Sorry, the comment form is closed at this time.