As one of LTSC’s three original staff members, 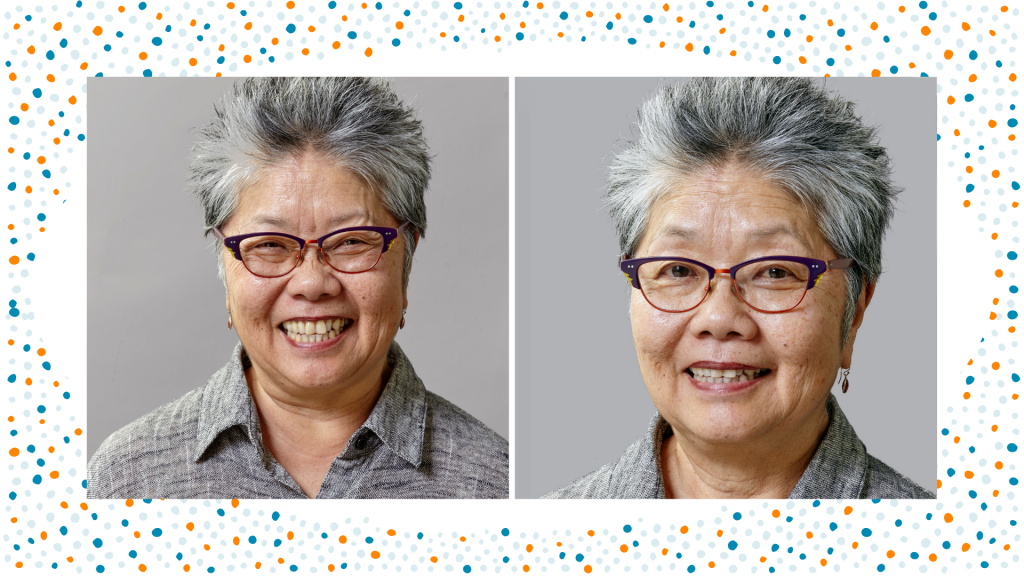 Evelyn Yoshimura joined Little Tokyo Service Center (LTSC) on October 15, 1980 as one of the organization’s three original staff members. Her retirement comes after almost 40 years at LTSC and decades of work in the Little Tokyo community. As LTSC’s Director of Community Organizing, Evelyn’s social activism and grassroots organizing helped steer LTSC’s mission and values over the years. Her wisdom, moral compass and moxie will be sorely missed–but her vision and legacy continues on in LTSC’s work.

“I first met Evelyn Yoshimura in the mid-1970's when I got involved with the Little Tokyo People's Rights Organization that was organizing residents and stakeholders to fight evictions of low income residents and small businesses back then. Evelyn was a ``veteran`` activist and I was a young kid who didn't know much. But she took the time to take me under her wing and helped me understand the history and significance of Little Tokyo. As a child, my family would come to Little Tokyo for festivals and shopping–but Evelyn's wisdom and experience built a deeper connection and commitment to preserving and fighting for Little Tokyo in me - something that has stuck all these years. While I was off to college up north, Evelyn worked very closely with my parents - Bert and Lillian Nakano - throughout the redress and reparations movement. She was a great friend and source of support to them. And so when I was able to start working at Little Tokyo Service Center, and was able to work with Evelyn again, it was like a homecoming. She is one of our unsung heroes, and while she may not be as widely recognized through awards, by public officials and in the media as she deserves–if you talk to generations of people involved in the community, she is deeply respected and loved.”

“Evelyn was my 'go to' person, my 'sounding board' who would jump in when things had to be done quickly. She played important roles in struggles like the Rafu Shimpo Workers Support Committee, NCRR and redress, anti-apartheid and the Free South Africa Movement to name a few. She was the person I checked in with about responding to the attacks on Muslims and Arab Americans after 9/11 which guided NCRR leadership to plan the vigil in Little Tokyo.”

Kathy Masaoka, LTSC Board of Directors

“Evelyn brought thoughtful, level headed perspective to difficult conversations while clearly advocating for ideas and principles she believed in. She worked with people as one of them, not as someone who stood apart from ordinary folks. That was her strength. Her contributions can be measured by the number of hearts and minds she touched, from the elders living in Casa Heiwa and Little Tokyo Towers, to the family-owned businesses, to the young people from various campuses that sought her guidance.”

An Interview with Evelyn Yoshimura

Below is an excerpt from a 2021 interview with Evelyn (by Chris Aihara) as she reflects on her career and work in Little Tokyo:

Talk a little about the early days of the organization, Little Tokyo Service Center.

Calling LTSC an organization at that time is a loose thing. We were learning as we were doing.  Initially the 3 of us- Bill Watanabe, Yasuko Sakamoto and me-  shared one office on the 3rd floor of the Japanese American Cultural & Community Center (JACCC). Both Bill and Yasuko were social workers; I was more like an activist. I was not afraid of going out into the community, talking to people and learning about the community. Yasuko was a “do-er”– whatever needed to be done. Bill was more intellectual, figuring out systems. I think he wanted me to take on things like putting together a filing system, but that wasn’t me. 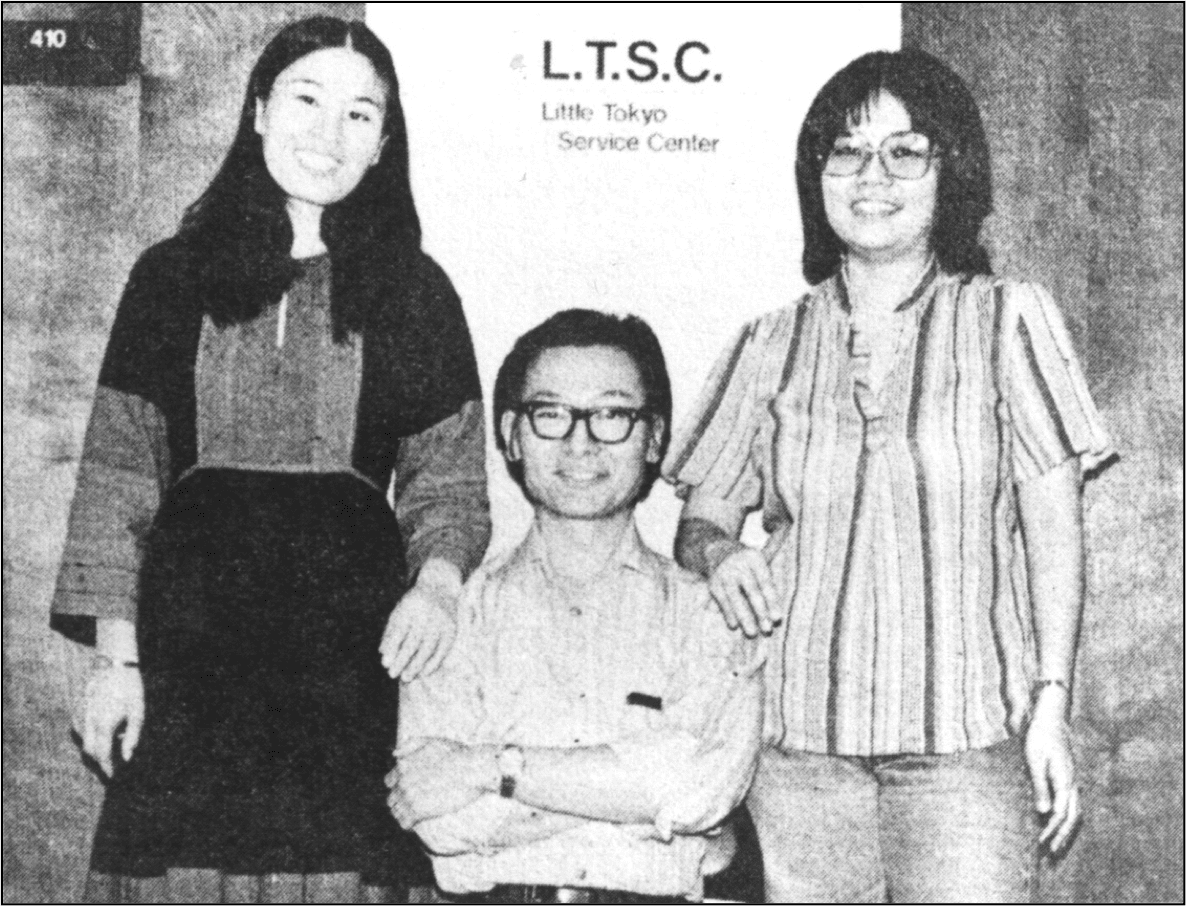 Who were some of LTSC’s early clients?

People would walk in and ask for help. They had a range of needs; for many it was “GR” or general relief. Most of them were low-income and Japanese-speaking. To get better known in the community we would participate in things like the Little Tokyo Community Mochitsuki. On the Monday after the mochitsuki, Yasuko and I spread the word that we would distribute the leftover mochi out of the LTSC office. It was a mochi frenzy. So many people came to our office wanting mochi, Yasuko and I ended up covered in mochi powder. 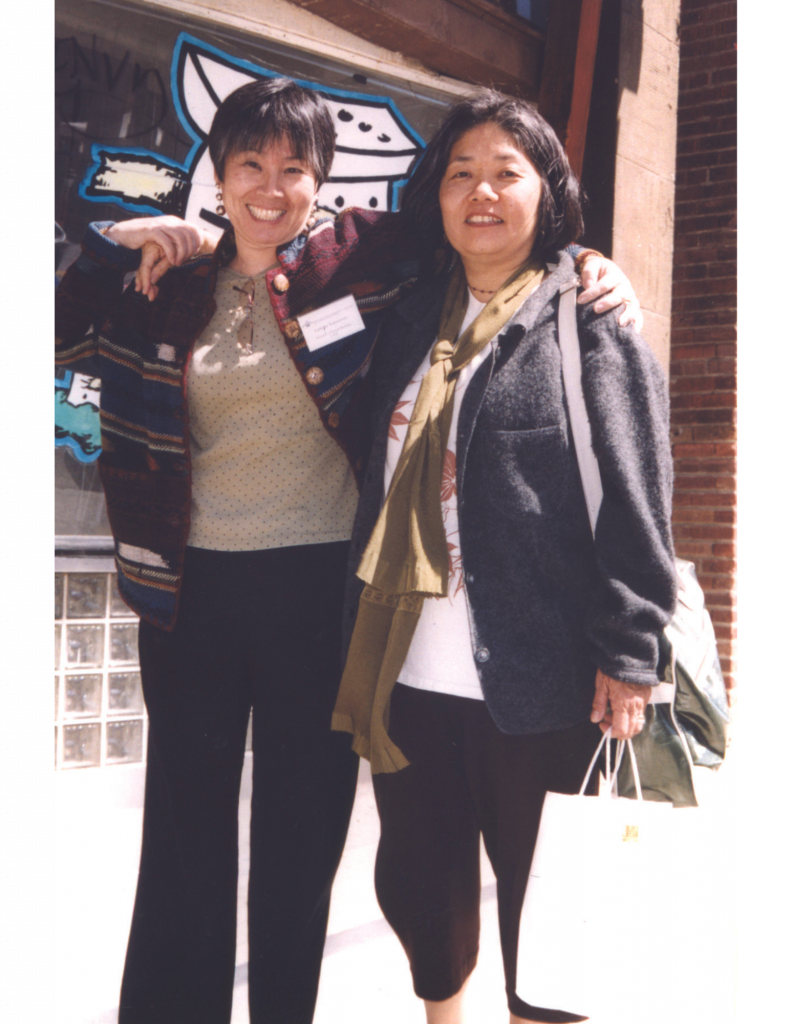 Evelyn with Yasuko Sakamoto in front of Far East Building

What projects did you work on in those early days?

The whole Redress movement for Japanese Americans happened about this time and it became a big part of our work. There was a call out for people’s testimony of their Wartime experiences and people started coming to the LTSC office. A lot of work fell upon Yasuko who put together the translation system and personally took most of the testimony of Japanese-speakers. And she wrote it out all by hand! The Redress movement hit us in ways we weren’t expecting. We knew about people’s experiences intellectually, but emotionally, the impact of their experience really hit us. This was the first time people got to tell their stories. We had argued for an evening session for testimonies at Little Tokyo Towers and I remember Mrs. Okamoto brought her brother’s bloody clothing with her – clothing he was wearing when he was shot in the back and killed at Manzanar. She had kept it all those years. How can you respond to something like that? It was cathartic for so many people. 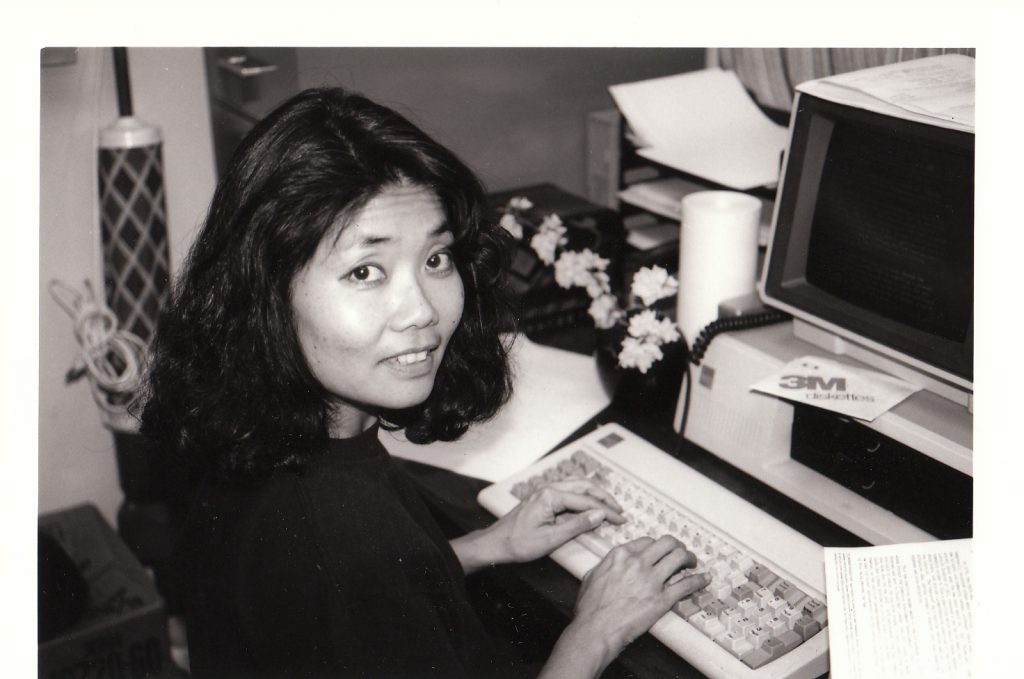 You left LTSC for a few years and worked at the Rafu Shimpo.  When you returned to LTSC what projects did you work on? 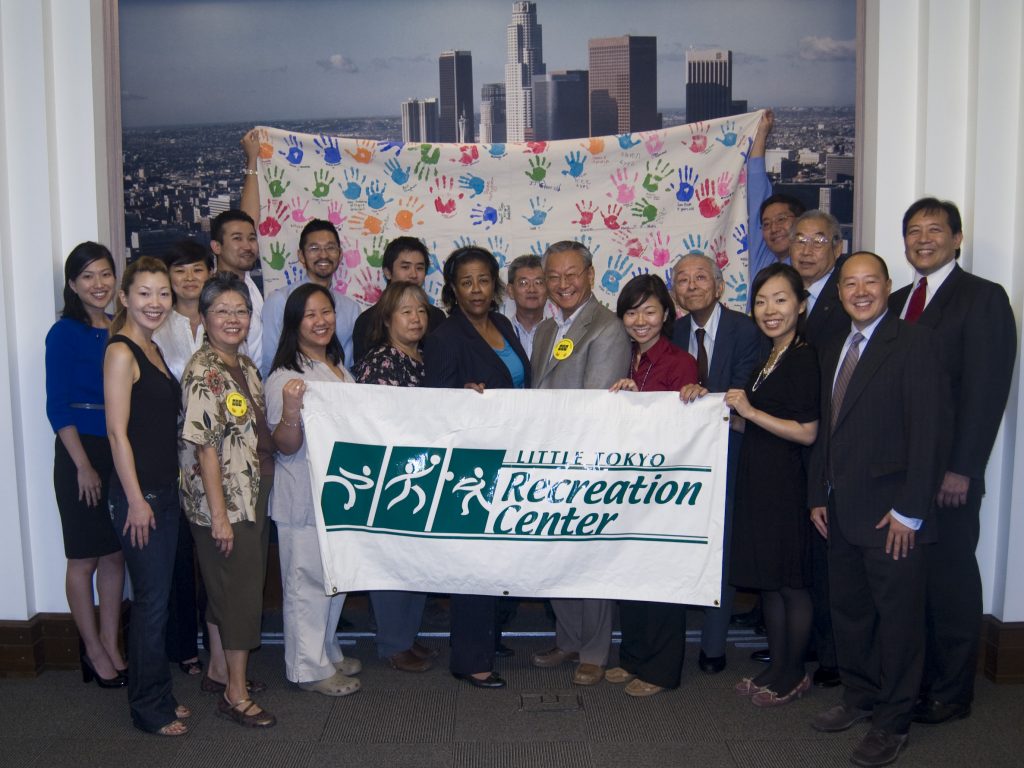 How did you learn to be a community organizer?

Learning by doing mostly. I did learn a lot from Lillian Nakano working with her on Redress.  Lillian could concretize a concept, breaking it down to practical steps like ‘who is a stakeholder?’ and ‘what role should they play?’ I saw my work as a community organizer at LTSC as defining stakeholders in the community in the broadest way – including people who are sometimes overlooked like seniors, residents, and small business owners. And then work to bring these stakeholders’ voices into the decision-making process. I tried to do this in all the projects I worked on: the Rec Center, the fight to prevent the building of the jail next to Nishi temple, and the construction of the Regional Connector transit project. 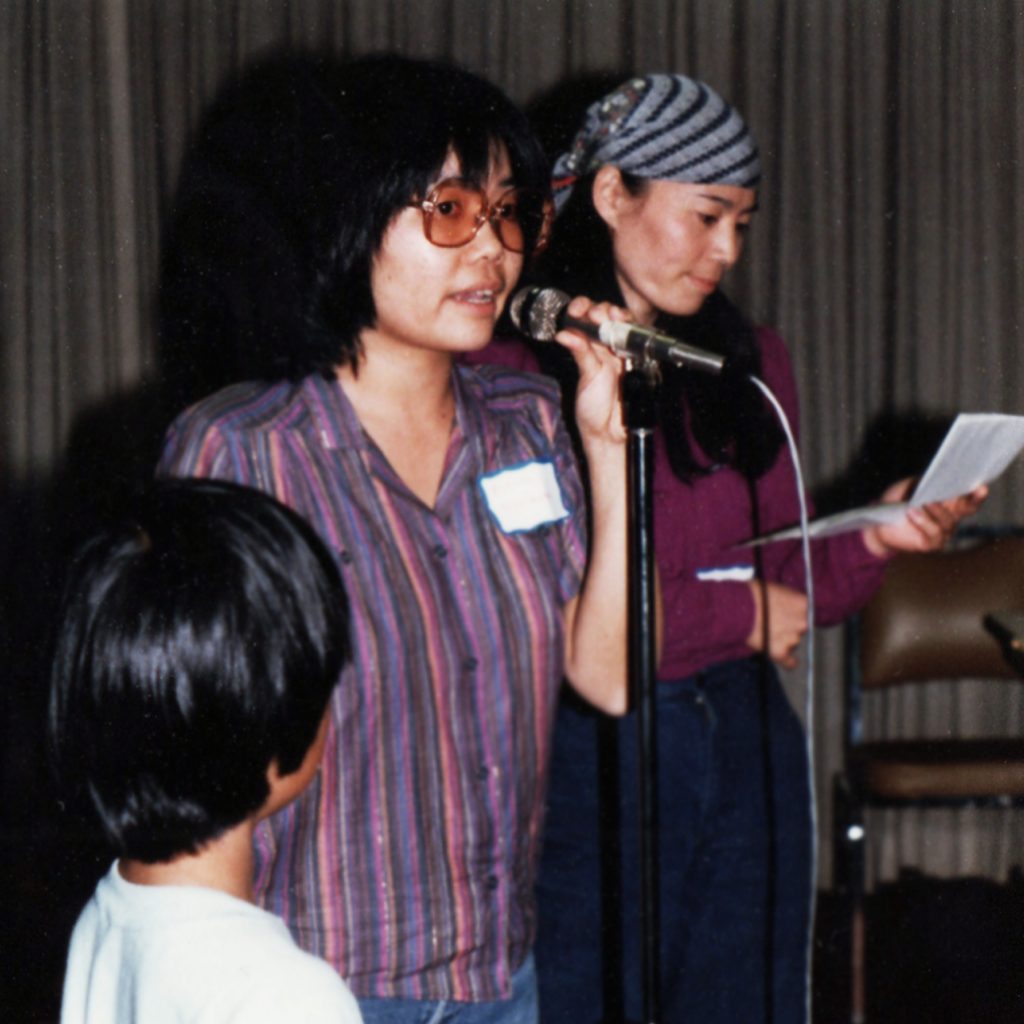 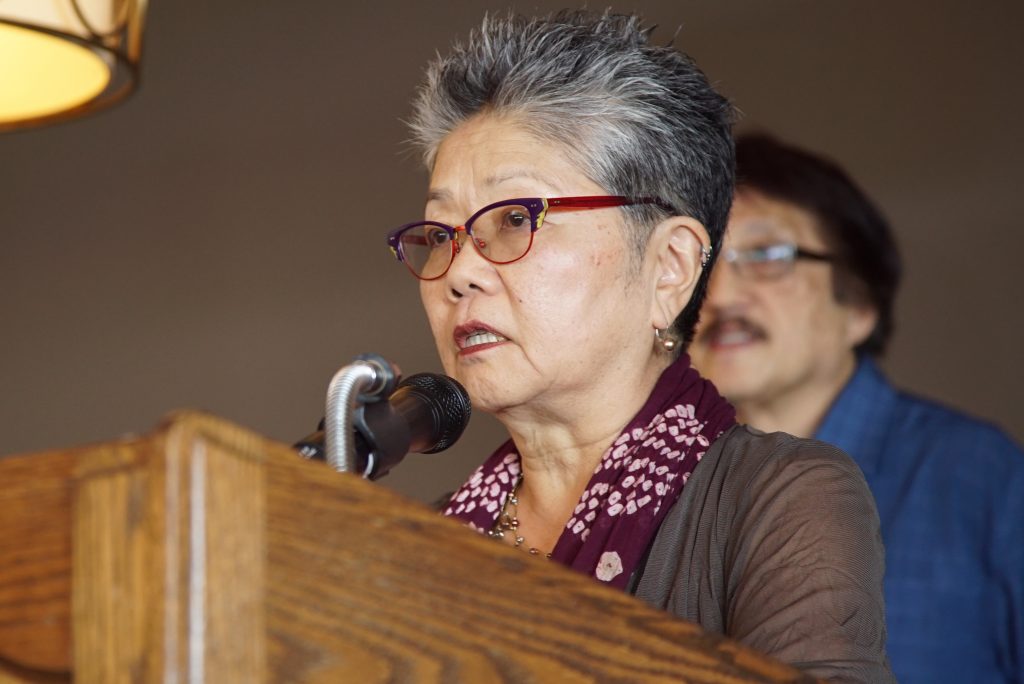 What is special about Little Tokyo for you?

I have a familiarity–a comfort-level in Little Tokyo.  It’s a place where I can be as Japanese as I want to be. 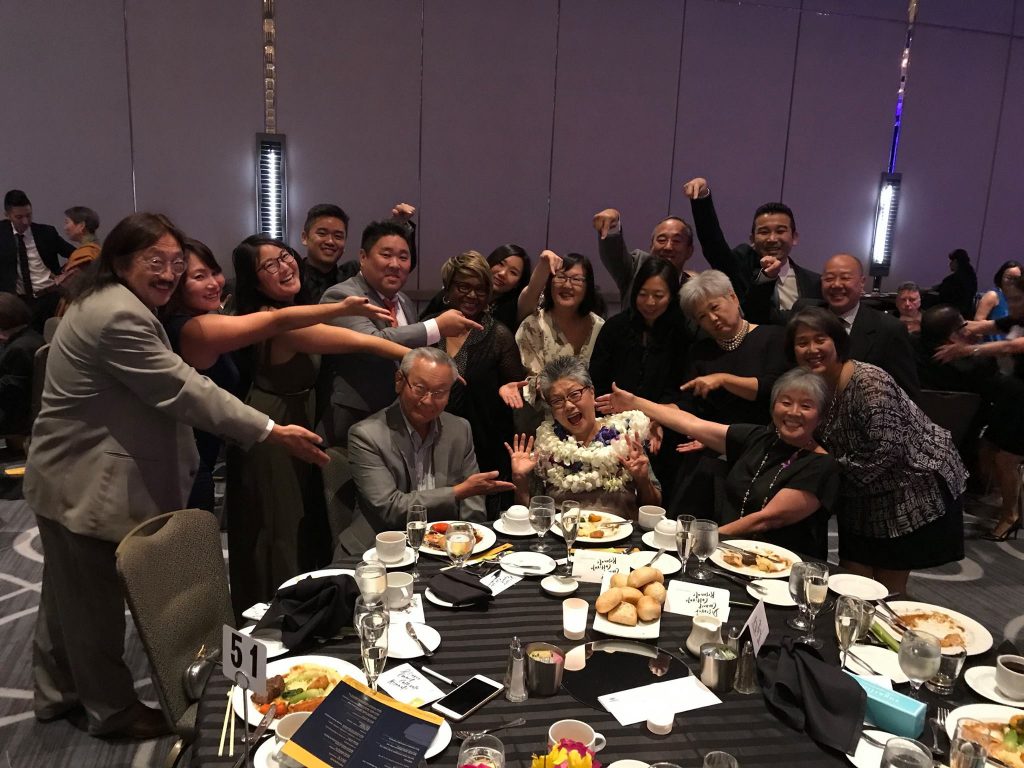 How do you feel about your work at LTSC?

I really enjoyed the work. I had felt like my life had meaning before LTSC, but it was very abstract. Working directly with people was very real. 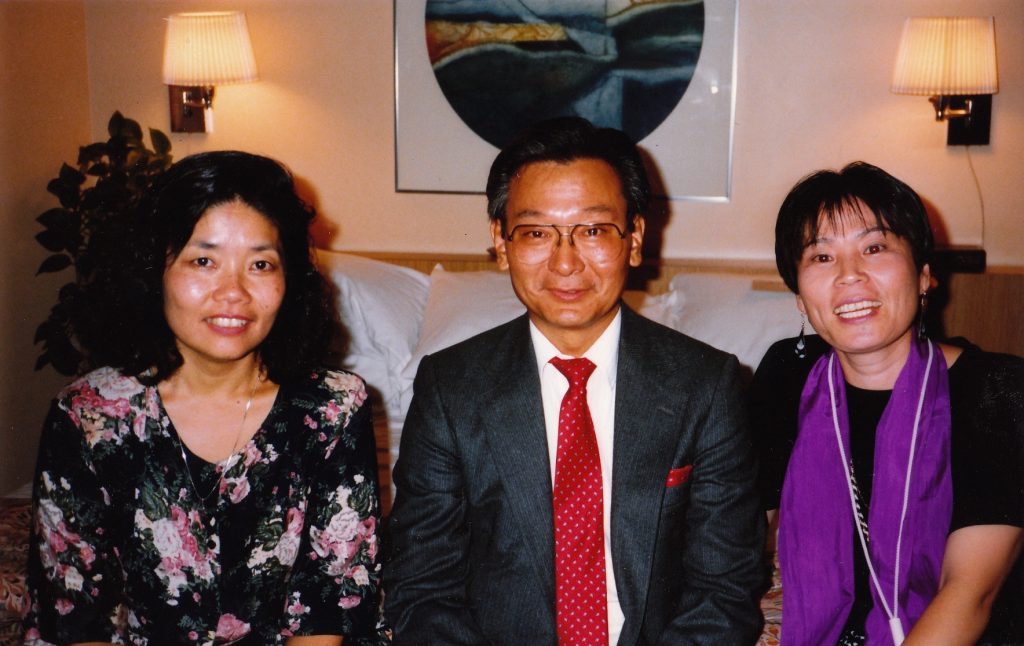 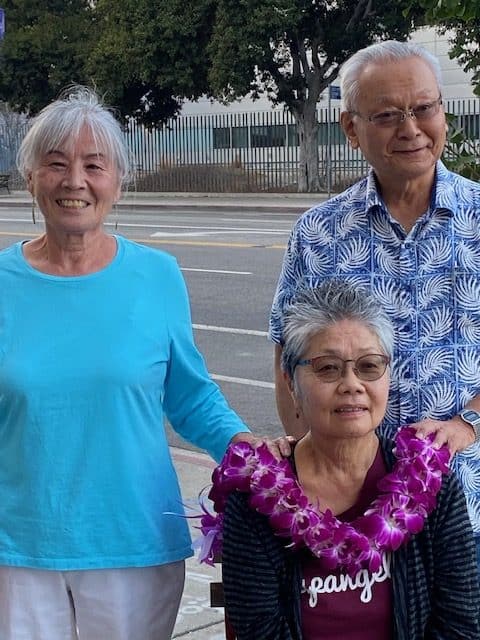 To read more about Evelyn’s background and contributions to the Asian American Movement and Little Tokyo, click the button below. 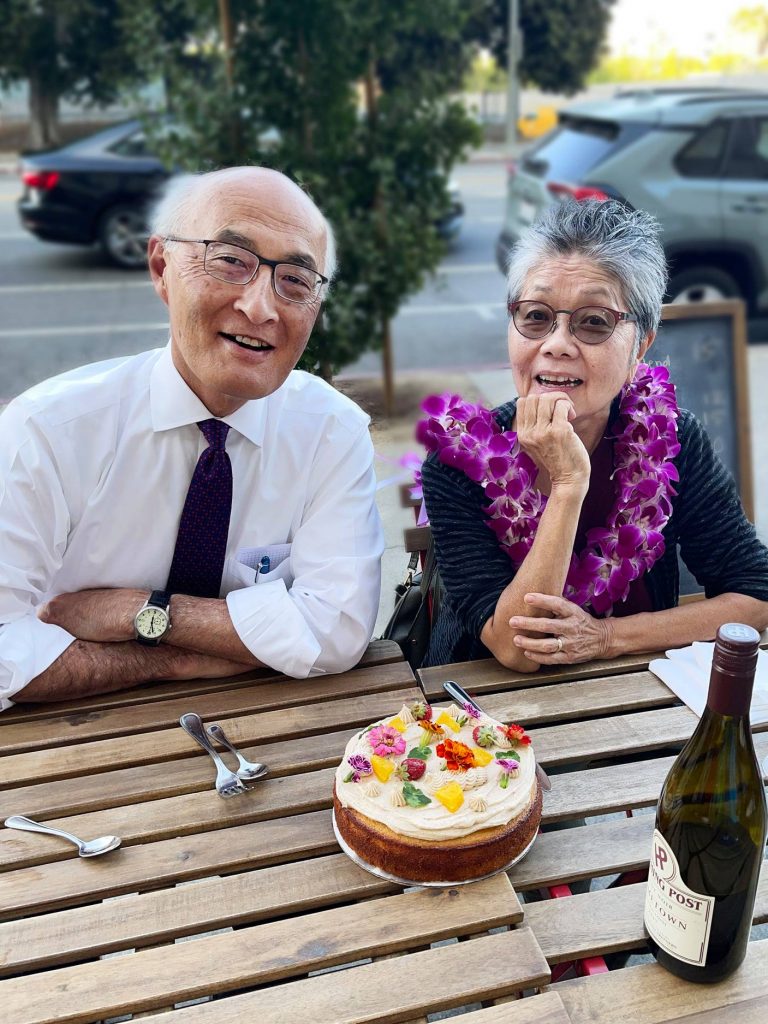 Evelyn at her retirement lunch with husband Bruce Iwasaki