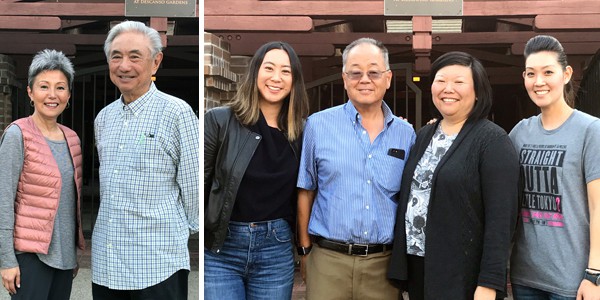 Little Tokyo Service Center (LTSC) is pleased to announce a new president for its board of directors and the addition of four new board members. The board provides oversight and leadership for LTSC, as the organization promotes “positive change for people and places.” Dick Kaku will serve as LTSC’s board president. The new members are: Lisa Hasegawa, Kelsey Iino, Kira Teshima and Keith Terasaki.

“We are excited to have Dick Kaku as our new board president as well as the other great additions to our board,” said LTSC Executive Director Dean Matsubayashi. “These individuals bring a wealth of experience and expertise to guide LTSC into the future.”

Dick Kaku is a retired transportation planner and traffic engineer, who worked as a consultant for over 40 years, assisting public agencies, service organizations, educational institutions and private firms. He has been an active member of the LTSC board of directors for 10 years, applying his expertise on a variety of LTSC projects involving transit planning, environmental planning, construction and parking. In addition, Kaku serves on two committees for the San Fernando Valley Japanese American Community Center and is the outgoing president of the board of directors for the Pacific Bridge Housing Corporation. Kaku was first introduced to LTSC by Bill Watanabe, LTSC’s founder and former executive director. The two have remained friends since attending the same Japanese School in the San Fernando Valley.

Dick replaces former Board President Debra Nakatomi, who served in that capacity since 2014.

Lisa Hasegawa is currently the Assistant Director for Federal Affairs for her alma mater UCLA and serves as a mentor to graduate students at the School of Public Affairs in her role as a Senior Luskin Fellow. Previously, she was the inaugural Activist in Residence for the UCLA Asian American Studies Center and the Luskin School of Public Affairs Institute for Inequality and Democracy. Hasegawa also served for 15 years as executive director of the National Coalition for Asian Pacific American Community Development (National CAPACD), the first national advocacy organization dedicated to meeting the housing and community development needs of Asian American and Pacific Islander (AAPI) communities. Prior to joining National CAPACD, Hasegawa was the Community Liaison for the White House Initiative on AAPIs. She has also worked for the U.S. Department of Health and Human Services, Health Resources and Services Administration and the Office of Minority Health.

Kelsey Iino is a counseling faculty member at El Camino College. A Los Angeles native, Iino has volunteered at various Little Tokyo organizations for over 20 years. In addition, Iino currently sits on the Board of the Astronaut Ellison S. Onizuka Memorial Committee, the Board of the El Camino College Foundation and the El Camino College Federation of Teachers Union Board. Iino’s passions are community and education. She has been one of the key organizers for the “Straight Outta Little Tokyo” events, which help raise funds for LTSC’s effort to build the multipurpose sports and community center Paul I. Terasaki Budokan.

Kira Teshima is an associate in the Real Estate, Land Use and Environmental Practice Group at the Los Angeles office of Sheppard, Mullin, Richter & Hampton LLP. Teshima’s practice focuses on land use and real estate matters. She has worked on a variety of complex housing, mixed-use development and utility scale energy projects throughout California. She also represents developers and management in traditional labor law issues, including union negotiations.

Keith Terasaki is the assistant chief of radiology at Kaiser Los Angeles Medical Center in Hollywood, where he was previously the chief of radiology for 10 years. Born and raised on the west side of Los Angeles, Terasaki is the son of the late organ transplant pioneer and philanthropist Paul I. Terasaki and Hisako Terasaki. Terasaki serves on a number of non-profit boards, including the boards of the Colburn School, the Wesley Health Centers, the YMCA of Metro Los Angeles, the UCLA Life Sciences and the UCLA Japan Center. In addition, he is chair of the Terasaki Family Foundation and Terasaki Research Institute. Terasaki lives with his wife Cecilia on the west side, near where he grew up. They have two grown children, Paul and Susie.

Little Tokyo Service Center is a social service and community development organization that has been creating positive change for the people and places in Southern California for more than 37 years. We preserve and strengthen the unique ethnic communities of our region and help people thrive. Starting with our own home in Little Tokyo, we build and strengthen communities throughout Southern California where people, culture and our collective future matter.