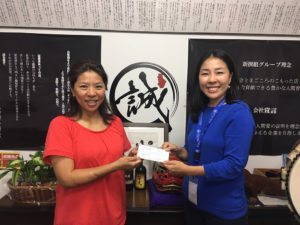 LTSC’s Social Services Department and Paul I. Terasaki Budokan team were invited by Shin-Sen-Gumi to participate in the restaurant’s summer charity festival in the South Bay. The event, which featured carnival games and delicious Japanese street foods, offered LTSC the opportunity to share information about its various programs with a diverse audience. “We are very grateful to Mr. and Mrs. Mitsuyasu Shigeta for allowing us to interact with so many young Japanese-speaking families,” said Hiroko Higuchi, community engagement coordinator for LTSC’s South Bay office. Shin-Sen-Gumi also generously donated a portion of the proceeds of the event to Terasaki Budokan.