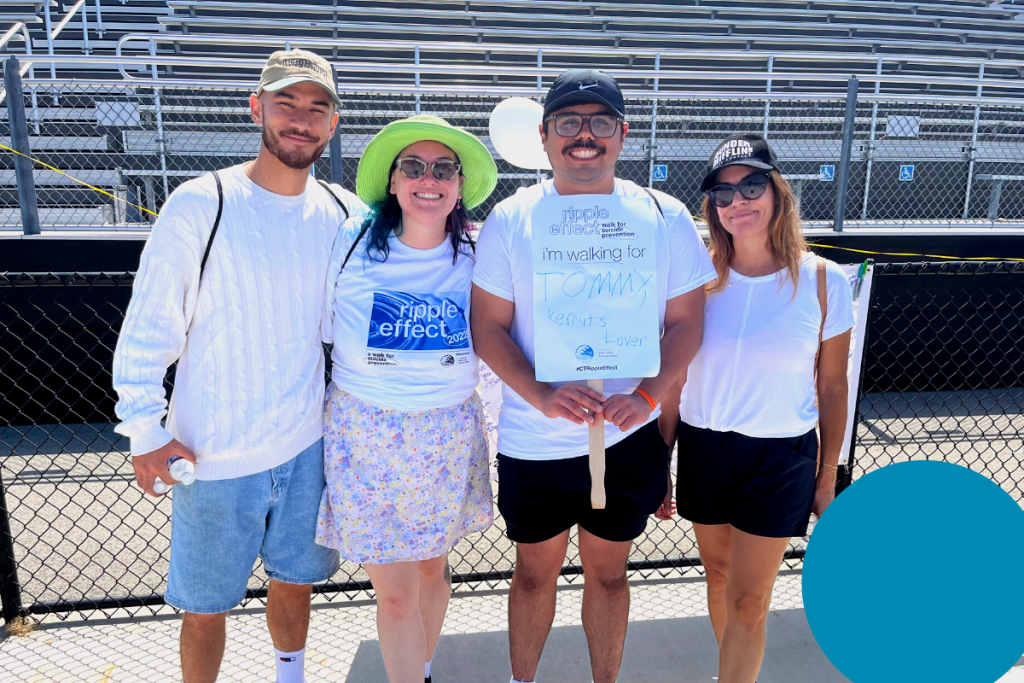 Shining a Light on Suicide Prevention

“You never know what people are going through,” Elliot shared as she walked in memory of her friend Tommy, who died by suicide. This September, as we observe Suicide Prevention Month, we reflect on the strong and compassionate community that gathered at Changing Tides’ event, ‘Ripple Effect: Walk for Suicide Prevention’, this past July.

For those who lost a loved one to suicide, Ripple Effect created a stigma-free space to remember loved ones and served as an opportunity to take action to prevent future tragedies. Friends since high school, Elliot, David and Elijah walked at Ripple Effect in memory of their friend, Tommy, who died by suicide in 2019 at the age of 19.

David: So we’re here for our friend Tommy, he passed away around 2 years ago. He took his own life, and it was something that–we knew he had issues, but didn’t realize the severity. Just as [this event’s] name, it’s been a ripple effect since he passed, because we all feel a lot closer, we’ve communicated with each other way more often, and it just feels like we’re stronger together even though we’ve lost someone.

Elliot: That was definitely the silver lining and it really is a ripple effect. I think it’s so fitting for this event. I used to say it’s like putting your hand through a spider web because there’s so many different connections and so many more people are affected than you think, and whenever somebody [dies by suicide] or is consumed by their illness, they’re never going to see the impact that it has on the people that love them. They have no idea how many people love them.

David: I think the stigma surrounding mental illnesses is gradually decreasing and we’re seeing more and more people are becoming open. We shouldn’t fear or hide or shut away from the fact that we’re going to talk about mental illness because everyone suffers in some form.

Elliot: You never know what people are going through and I feel like after experiencing this and losing somebody so close and somebody that we loved so much, now we’re checking in. I worry about everybody now, not in a negative way, I just want to make sure everybody knows that they’re loved, always.

Elijah: I wish that we didn’t have to come out here and walk because of this, but unfortunately we do. At the same time, it’s good that we’re raising awareness and letting people know that there are resources out there for them if they’re feeling in a position where they’re alone. I know Tommy would have appreciated it and I know that he would have been here participating with us too if he was here. I know it’s hard when you’re in that state of feeling lonely and like there’s no one there to help you, but reaching out is really the best thing that you can do. It’s hard to feel like you’re going through that stuff alone. But you’re not. We’re not alone. We’re all here for each other.

On July 16, 2022, Changing Tides, a program of Little Tokyo Service Center, hosted ‘Ripple Effect: Walk for Suicide Prevention’ at Jack Rose Track at California State University, Long Beach. With over 400 participants, volunteers and countless donors, Ripple Effect raised over $100,000 for Changing Tides’ programs and initiatives to support mental health and suicide prevention in the AANHPI (Asian American and Native Hawaiian/Pacific Islander) community. According to recent statistics, suicide is now the leading cause of death for Asian Americans aged 15-24. Attendees created and joined walking teams, and participated in time-based walks in honor of individuals or groups. For example, some attendees participated in a 21-minute walk to honor Nick Song, who died by suicide at 21 years of age, while others participated in a 33-minute walk to raise awareness for the 33% of deaths of AANHPI aged 15-24 which are caused by suicide.