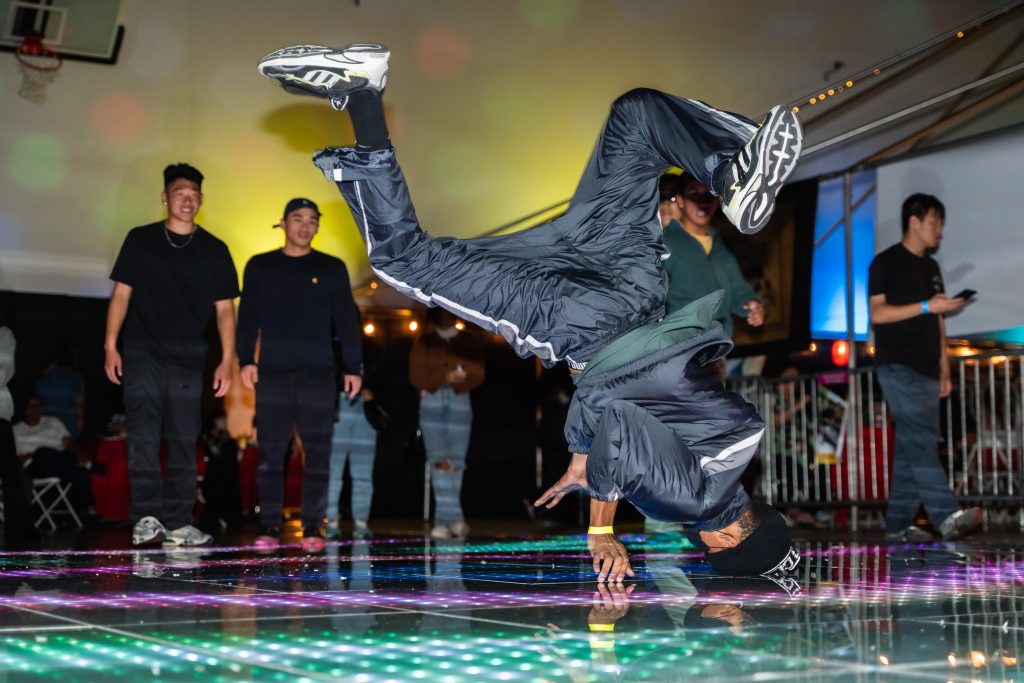 Once a dream, now a reality, crowds gathered at LTSC’s newly constructed multi-purpose community center, Terasaki Budokan, on October 15, 2022 for the fifth annual Straight Outta Little Tokyo (SOLT) fundraising event. The spacious venue hosted over a thousand attendees whose very presence represented the realization of a long-held dream of those who once envisioned a space for people in the community to come together.

“Terasaki Budokan is a community-driven project, and events like SOLT create an inclusive and fun space for people to celebrate, dance and make memories together. It’s amazing to see the diverse, intergenerational audience that the SOLT planning committee has engaged over the years,” said Budokan director Ryan Lee.

SOLT is organized by a dedicated volunteer committee who followed in the footsteps of their grassroots predecessors of the 80s and 90s who recognized the lack of multi-purpose space in Little Tokyo. The event came to fruition to support Terasaki Budokan, a venue where generations might come together to reconnect and rediscover the value of their culture and heritage through shared experiences.

“Seeing over one thousand people attend SOLT in the Budokan is a dream come true for all of us,” said SOLT committee member, Brian Okuhara.

Previous SOLT events were part of Budokan’s capital campaign aimed at raising funds for the construction of the facility. Now having achieved that goal, this year’s iteration sought to continue raising funds to support the many mission-oriented programs that Budokan hosts for low-income youth, families and seniors.

The evening’s entertainment consisted of live performances from artists including Chazzu Sama, Elemental Funk, DJ Icy Ice and hip-hop trio Sugarhill Gang who headlined the event, as well as a b-boy battle. The lineup emphasized the intergenerational nature of the Budokan with attendees of all ages gathering on the dance floor. The event also featured the inaugural “Streets of Budokan” car show, displaying muscle cars, low-riders and restorations which hold a deep connection to the history and culture of Los Angeles.

Guests also got the chance to revisit the Oiwake bar top, a relic from a former neighborhood business which permanently closed its doors in recent years. Current legacy businesses were also represented with merchandise tables which could be browsed while enjoying a putting green or a game of “dough ball,” in honor of community member Jason Kato.

SOLT 5 ultimately ended in success for LTSC, raising $25,000 towards Budokan’s operations which will continue to strengthen the Little Tokyo community.